Becoming a hobbyist in all things firearms mean learning how to take different safety precautions to protect yourself and those around you. It also means loading up on gear that will ensure that safety, last quite some time, and of course, help you to become a better shot. And there’s no better way to ensure that than with a sturdy bipod.

If you’ve ever used a bipod before, you’ll understand the difference in accuracy and precision couldn’t be any more different. A bipod enables you to set up on the range or out in the field—relying on the bipod to give you a sturdy foundation onto the earth. Snipers and anyone taking up arms around the world need bipods to ensure that their shot doesn’t miss their target.

Because of their popularity, there’s a nearly-endless group of bipods to choose from. These range regarding features, quality, and ability. However, one of the first names you’ll hear thrown across the range will likely be Atlas.

An Atlas bipod is going to be recommended on account of many different factors. The company is made in America, and services not only civilians but the armed forces and police as well. Their bipods can be found in war and on the practice field, and often make the transition from one to the other seamlessly.

So how does an Atlas bipod compare to the myriad of other potential manufacturers, and does it live up to the hype? We’re here to find out and see if the Atlas bipod is right for you.

What Are Atlas Bipods and How Are They Different? 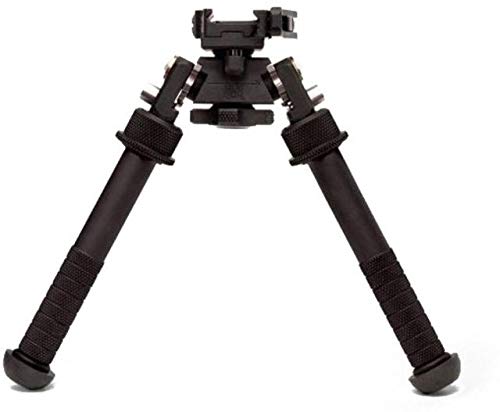 Before we break down Atlas in comparison to other makers of bipods, let’s take a closer look at what every marksman or woman needs out of a bipod.

Typically, you need to make sure that any bipod you purchase comes with the following right out of the box:

Most of these are self-explanatory, but we’ll walk through just a brief overview of each.

A clamp or mount is going to be paramount to just about any other component. Your firearm needs to be secured to the bipod fully and totally. Anything less could result in a catastrophic disaster.

Leg extensions and a clear means of adjusting them also remain high on the list of needs. Your prospective bipod needs to easily and securely adjust to the terrain and to whatever position you may need it to rest in. Complete confidence in your gear is a must and required for proper firearm procedure.

The end of the legs is another point of importance. You’ll often find that bipods are fitted with standard black rubber grips, which work well for the range, but not so well in the field. Options like cleats or spikes should serve you well no matter where you are or what you’re setting up on

An all-steel or aluminum build is the industry standard for bipods. While other materials certainly hold up well in the short-term, it’s no secret that opting for one of these two metals means opting for the best, longest-lasting materials.

When it comes to Atlas, the company offers bipods in just about every variation you can think of.  From simplistic bipods that only hold to the standard 45-degree angle to options that could withstand just about any scenario possible, Atlas focuses not only on quality but on quality as well.

What Makes the Atlas Bipod Unique? 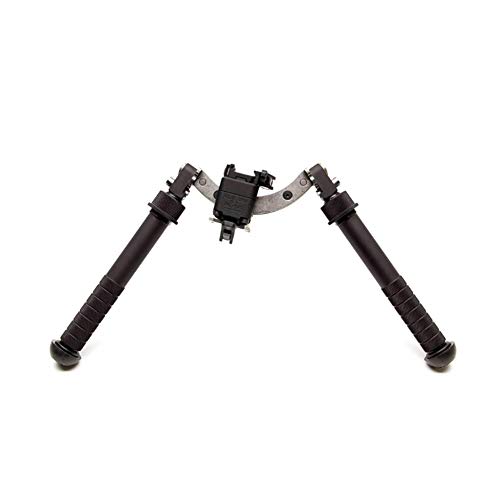 One of the best parts about shopping from Atlas for bipods is the hyper-focus the company has on ensuring customer satisfaction as care.

Atlas isn’t a company that makes several different types of accessories and products. By and large, Atlas produces bipods and little else. This niche focus means that not only is Atlas one of the premier options for a specialist retailer—but that bipods from Atlas are going to come with the quality and care you can only expect from a specialist.

What’s also especially valuable from a manufacturer like Atlas is the focus on transparency. The company provides a clear and exhaustive chart of current offerings and compares them on metrics most valuable to sharpshooters. This makes it easy to see not only if Atlas has an offering that right for you, but which of their offerings best matches your needs.

If you take a look at their offerings, you’ll also notice that almost all of their products are crafted from 6061-T6 aluminum. For those unaware, this specific variant of aluminum is widely-recognized as some of the best for use in military and civilian application. Atlas does not cut corners with craftsmanship, and it truly shows.

We also need to take a moment to recognize the built-in pan functionality of many bipods from Atlas.

When utilizing bipods away from the range, it’s often advantageous to adjust from your original position to re-align your shot, or simply be in a better position to operate in. For most bipods, this usually means lifting the entire assembly and re-adjusting in this fashion.

When using bipods from Atlas, you’ll be able to utilize the full potential of a built-in pan. With a built-in pan, you can adjust your shot and rotate a considerable distance without changing your placement.

This is highly advantageous to snipers and hunters, and while Atlas isn’t the only company working with built-in pan, they are certainly made unique by their proliferation of the design choice. 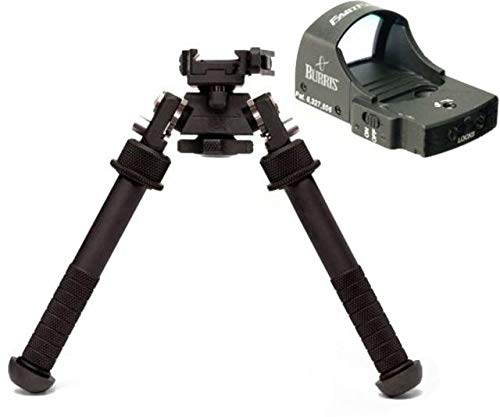 High-quality design and a focus on extra features like a built-in pan functionality won’t be coming cheap, and when you compare bipods from Atlas to others, you shouldn’t be too surprised to find that there’s a fairly large discrepancy in price.

Since bipods are generally simplistic in design, you’ll often find them offered for little more than the price of a fast food dinner by various no-name companies. The simple V-shape is easily replicable, and if you’re in the market for the most budget option, Atlas just isn’t going to be for you.

Bipods from Atlas start at a couple of hundred dollars and depending upon what sort of bipod you’re in the market for, the price is only going to go up from there. Atlas is huge on pushing bipod and rifle accessories that are designed to enhance and supplement their overall design, and if you opt for these extra goodies, you may be closer to $$$ than $.

We’ll be comparing these prices to other premium brands a little bit later on, but generally speaking, Atlas is one of the most expensive bipod manufacturers out there. However, their commitment to quality remains one of the major selling points, and the company seems to be at no risk of failing due to high cost anytime soon. 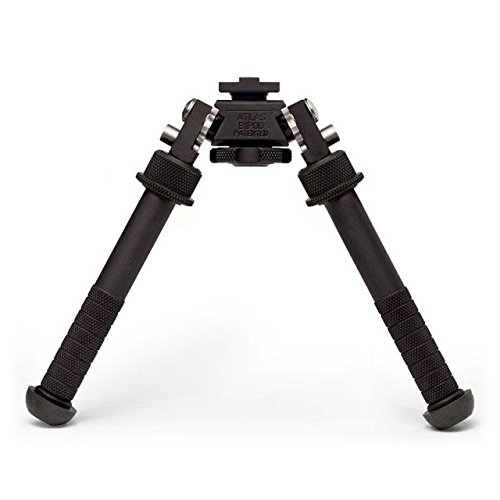 Atlas worked hard to ensure that its reputation in the industry remained based on word of mouth and grassroots operation as opposed to over-the-top marketing. This is often why those outside of the weapon accessory business are surprised to find that Atlas has one of the best reputations and public perception around.

Those who own and love bipods from Atlas swear by the overall quality and focus on tactical design. These bipods are often put to hard use—usually taken out into the field and not treated kindly by the elements. The ability to not only withstand this abuse but likewise thrive and operate features like a built-in pan is admirable, to say the least.

Adherents to Atlas are also quick to mention the total focus on adjustability. Being able to maneuver your bipod into various positions will seem less important when shooting on the range, but out in the field, it can make a world of difference.

Those who operate in rugged terrain and need a bipod that adjusts to any gradient are pleased with the sizing offered by Atlas as well as the clear online guide that leads prospective owners to the right bipod for them.

The adjustability of a bipod from Atlas also seems to be contrasted with the high-grade materials, which enable the bipod to hold fast in any position it is placed in. Being able to balance a rock-solid stance and still adjust is a tall order, but seems to be one of the best strengths of the company.

That’s not to say that no common complaints can be found, however.

The sturdiness that Atlas is known for seems to suffer on fully-extended rifles and at the edges of the bipod’s range. Almost all bipods are going to be far less dependable fully extended, but even so, this problem is reported often enough to mention it as an issue for the manufacturer as a whole.

Likewise, Atlas uses a unique adjusting system that’s going to take some getting used to, even for seasons veterans out on the field. These are designed as such to keep the bipod stable at most adjustments but often means that you’ll be fiddling with your bipod more often than you’d like for the first few weeks.

If you’re looking for the best bipod company to make an apples-to-apples comparison to Atlas, you shouldn’t look any further than Harris.

Harris bipods are designed with hard use in mind and often make bipods that come as a direct answer to offerings from Atlas. The company is also similarly laser-focused on bipods over all other types of accessories for rifles, and sell from a similarly minimalistic online storefront.

Comparing to Atlas, we think that Harris offers a different but respectable solution for rifle stability.

Harris bipods are more affordable as a whole, and while they might not all be made from the same military-grade aluminum, they remain sturdy and designed for use in the field. Harris bipods seem designed as a manufacturer for the middle-ground rifle user, as these products are far better than what you’d find in your local shop.

A bipod from Atlas is going to last quite a long time provided you treat the product right. And even if you don’t, you can still count on these bipods to stick by your side no matter what.

However, their cost is prohibitive enough for us to recommend that those just entering into the bipod fields might want to look to Harris or a different company first.

If you need a bipod that’s going to help you feed your family and fight for your life, opt for an Atlas option that’s going to be by your side. If you’re primarily going to be working from the shooting range, however, you may want to consider saving your money.

Whether you make a purchase from Atlas or not, we hope that our guide here has given you a bit of insight into the world of bipods and one of its top manufacturers.

As always, ensure you’re practicing proper safety protocols as you navigate the world of weaponry, and if you’re using a bipod, make sure that you’ve attached securely and understand how to competently and confidently operate your equipment.

And if you’ve opted for a bipod from Atlas, make sure you’ve learned the unique adjusting settings and have gotten comfortable with your product. Chances are, you’ll be using it for years to come.