If you’re unfamiliar with handgun rounds, 9mm and 10mm rounds sound like they’re practically the same thing. However, that’s not the case at all! When you’re comparing 9mm vs 10mm rounds, you’ll find that both behave very differently and result in very different handguns, as well. Which makes the most sense for you? That’s exactly what we’re going to help you decide.

Gunsmithing for Beginners: How To Learn To Customize, Repair, And...
Buy on Amazon

Practical Gunsmithing for Beginners: A Simple guide to gunsmithing and...
Buy on Amazon

This guide will explain the differences in history and purpose behind the 9mm and the 10mm and help you better understand the pros and cons of each. By the time you’re finished reading you’ll have a solid understanding of handgun calibers and be able to accurately decide what’s right for you.

The 9mm Goes Way Back

Because all things guns and ammo aren’t standardized (or maybe we all just like to keep things confusing), the 9mm goes by several different names. You might hear it called the 9x19mm, the 9mm Parabellum, the 9mm Luger, or even the 9mm NATO. To make it even more confusing, all these terms don’t quite refer to the same cartridge!

The round we mostly know today as the 9mm came into being during World War I. DWM, the German ammo maker who created the 9mm wide, 19mm long bullet, was known by its motto, “if you want peace, prepare for war.” In Laton, “prepare for war” translates to “Parabellum.” The head developer’s last name was Luger, which explains why the 9mm can interchangeably be called the 9mm Luger or the 9mm Parabellum.

The 9mm NATO, however, is not the same thing. The outer dimensions are the same, but it’s loaded to a higher pressure (124 grains instead of 115 grains). Either way, one of the things that’s unique about the 9mm is that is slightly tapered. This extra spacing at the top creates tremendous feeding reliability, a feature that has contributed to the caliber’s strong reputation for accuracy.

Gunsmithing For Beginners: Learn To Repair, Customize, And Refinish To...
Buy on Amazon

The Complete Guide to Gunsmithing: Gun Care and Repair
Buy on Amazon

In the almost century that the 9mm has been around, it’s been redesigned for almost every kind of weapon under the sun, including pocket pistols, carbines, and revolvers, making it an extremely versatile caliber. It’s estimated that approximately 60% of all law enforcement currently utilizes the 9mm, including the FBI.

While some complain that the 9mm has less velocity and penetration capability than the .45 ACP because of its smaller size and weight (and, typically, smaller handgun size). The problem with this line of thinking, however, is that .45s are typically heavier, much harder to place accurate follow-up shots with, and much larger, making them more difficult to carry concealed.

Ultimately, 9mm has gained tremendous popularity as a self-defense weapon because of its accessibility. Recoil is fairly light so that small-framed shooters or more timid shooters can handle the gun confidently, yet it’s still accurate and lethal.

Plus, the now widespread use of the hollow-point for self-defense purposes means that maximum penetration and expansion can be achieved even without a larger bullet. Hollow-points are so named because of their hollow tip. They are designed to expand or bloom upon impact.

This sets them apart from full metal jacket (FMJ) rounds, which are often faulted for penetrating too far (they don’t expand at all). An FMJ in a .45, for example, can easily pass through your assailant and hit an unintended bystander.

The 10mm and Why It Matters

The 10mm was created fifty years ago by Jeff Cooper. His aim, back in the early 1980s, was the create something to replace the .45 ACP. Remember how we noted what a big gun and a big recoil the .45 has? The 10mm was designed to fix this with a flatter trajectory and a better energy transfer from the bullet to the target.

In reality, if you look at the 10mm side-by-side with the .45, you’ll see they are very similar in size (and both are significantly larger than the 9mm). While ballistics are better on the 10mm, however, the recoil is stronger. In 1988, the FBI canceled a large order of Smith & Wesson 10mm pistols because most agents couldn’t handle the blowback.

The Beginner's Guide to Reloading Ammunition: With Space and Money...
Buy on Amazon

Gunsmithing Made Easy: Projects for the Home Gunsmith
Buy on Amazon

Ultimately, the .40 S&W replaced the 10mm in the FBI’s eyes, but the 10mm remains as a useful round today. Interesting pop culture note: one of the lead characters in Miami Vice used the Bren Ten, the original 10mm pistol, causing the gun to become extremely in demand. At one point, it was selling for more than $1,400, with magazines demanding more than $150!

Prices are back down to normal now, in part because it’s just not as popular as some of its counterparts. It delivers a huge kick thanks to its high energy (even higher than the infamous .357 Magnum round), but when lightly loaded is a dupe of the .40 S&W round.

Despite its replacement by the .40 and the fact that it’s not a popular weapon for self-defense, the 10mm is popular among handgun hunters. Yes, hunting with a handgun is a thing, and many of these enthusiasts feel the extra power in the 10mm is worth that extra recoil. In fact, a 10mm is powerful enough to take on North American bears!

Comparing the 9mm and the 10mm

When learning about the 9mm vs 10mm, it should be fairly clear which round is right for you. We should also take a moment to remind you that the best round is the round you use. The first thing most of us want to do is scour the internet to find the ultimate round, but there’s no such thing.

One of the most important factors that go into a round’s effectiveness is penetration, which refers to a projectile’s ability to penetrate far enough to cause harm to the intended assailant. This is measured using ballistic gel, a clear gelatin block that mimics living tissue (but not organs, bone, or cartilage).

The standard approved penetration at 10” is 12”-18”. This means that when a 9mm or 10mm round is shot from 10” away, it should penetrate approximately a foot to a foot and a half into the block of gel. Less than 12” is considered to mean that the round doesn’t have the power to move through clothing and potentially obstacles to cause significant harm to the attacker, and more than 18” means that the projectile will likely pass through the attacker.

When considering 9mm vs 10mm, ballistics testing indicates that 10mm will penetrate further than 9mm. In a self-defense scenario, this can be a problem; even a lightly loaded 10mm might cause harm to innocent bystanders after tearing through its intended target.

However, in a hunting situation, this might be a pro, since you might need to deal with brush in between you and your target and won’t want the brush to slow your bullet.

Recoil is the amount of kickback you’ll receive from your gun. In an ideal situation, you’ll be able to plant yourself squarely, face the target, and use both hands to slowly and carefully aim and fire. You’ll be able to take your time between each shot, and recoil won’t matter.

However, most situations are far less than ideal! A 10mm has a significant kick, quite a bit more than a 9mm, in fact. An inexperienced or timid shooter might be discouraged by this, as it can feel quite alarming.

Even an experienced shooter, however, can have trouble placing an accurate second shot with a 10mm. In a self-defense situation, when you don’t have the luxury of taking the time to regain muzzle control, this could spell disaster. This is why, even though a 10mm might technically have more stopping power, a 9mm is more often recommended for self-defense.

Ammo & Ballistics 6: For Hunters, Shooters, and Collectors
Buy on Amazon 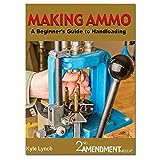 Making Ammo: A Beginner's Guide to Handloading
Buy on Amazon

It’s also important to note (in the 9mm vs 10mm debate) that a handgun chambered in a 9mm is usually quite a bit smaller than a 10mm. If you’re a large person, you might not have trouble concealing a 10mm, but a smaller-framed person might need that 9mm.

Whether you choose the 9mm vs 10mm, we’re confident you’ll have a great time deciding!

We’ve given you lots of great info but finding a gun shop or range that will let you test or rent a variety of different 9mm’s and 10mm’s is the best way to decide whether you feel comfortable with each gun’s respective recoil and other tradeoffs. Plus, it’s just fun to test!

The Practical Guide to Reloading Ammunition: Learn the easy way to...
Buy on Amazon