Which Ammo Should You Take With You For Hunting: 6.5 Creedmoor Vs 270

One of the most difficult parts of hunting is deciding on a loadout, and ammo is very much a part of this equipment decision. Thus enters the great debate of .270 Winchester vs. 6.5 Creedmoor, a question that countless hunters find themselves faced with every hunting season. How can you decide what to take?

Hunting is generally an all-day event and is always spent outside with the elements, and having the necessities is vital for any hunting trip. Bring too much, and you’ll be weighed down and tired out, bring too little, and you run the risk of being underequipped.

Picking what type of ammunition to bring is as important as deciding on hunting clothes. 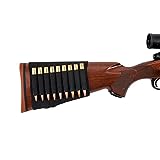 Let’s begin with how to decide what should be brought on a hunting trip. It’s important to know a handful of things; what you’re hunting, where you’re hunting it, and how far away the target will be.

Once you know these details, you’ll have an easier time choosing not just your ammunition but everything you’ll want to bring.

Making a choice between .270 Winchester vs. 6.5 Creedmoor is impossible without knowing what you’re hunting. Obviously, given the nature of both and the weaponry they’re used in, you’ll be hunting similar prey with both.But that doesn’t necessarily mean both are equally effective.You’ll also want to make sure that both are acceptable to bring. You may want more stopping power if you’re hunting wild boars or bears. If you’re at a distance than these rounds can make do, but you’ll want something with more kick if you end up threatened.Deciding on what you’re hunting is the first step to deciding a loadout. You’ll also want to make sure you can comfortably carry your spare rounds rather than leaving them jingling in the bottom of a bag.

Distance is where .270 Winchester vs. 6.5 Creedmoor comes into play more than in any other topic. While they have similar maximum distances, their effectiveness can differ, but we’ll get more into that.

Distances changes drastically depending on where you’ll be hunting. Hunting in the woods is generally a shorter distance due to trees and foliage, whereas plains and other such areas allow for clearer visibility and greater distance. That’s where the environment comes into play.

You wouldn’t bring swamp wading boots to a dry prairie, would you? It’s important to know the environment you’ll be hunting in before you can make a decision on loadout. Swamplands, forests, plains, and all other environments have their own necessities.The best thing to do is to scout out your hunting spots before the big day. That will help you experience the environment, so you can decide what you need to bring.Not only will this help you decide on a loadout and ammunition, but it will also help you see what medical and emergency supplies you’ll want.

.270 Winchester vs. 6.5 Creedmoor: Looking at Creedmoor

Now that we know how to decide on a general loadout, we can look a bit closer at which ammunition to bring. The .270 Winchester vs. 6.5 Creedmoor debate wouldn’t exist if there wasn’t some sort of difference between them.

With them being similar rounds that hunt the same beasts, how can you decide which is better?

We’ve talked quite a bit about comfort with your loadout, and carry weight is one of the most important factors there. The heavier your loadout, the more exhausted you’ll get. Once you’re exhausted, your aiming suffers, and you’ll make more noise shuffling about and scaring off your prey.One spot of superiority for the 6.5 Creedmoor is that it’s a bit lighter than the competition. Given that both are such small items, it likely won’t make a massive difference, but every bit counts when it comes to your carry weight.However, much more important than that is how that lighter weight affects flight. The lighter weight can alter the effective accuracy of your shot. That depends on personal preference and choice of firearm, so it isn’t a decision the internet can make for you.

This is the most important distinction between the two. The 6.5 Creedmoor has a higher effective distance than the .270 Winchester. Because of this, it may be preferred for the previously mentioned long-distance hunting environments.The increase in distance is partly because of the round’s celebrated trait of resisting wind and drift. That helps the bullet stay on target at farther distances rather than drifting away and hitting away from the target.That difference could be as little as an inch or two, but that’s all you need to miss a shot.

The farther distance plays right into the Creedmoor generally having greater aerodynamic qualities. That contributes to the increased distance as well as explaining the better accuracy offered.Also, you’ll likely have fewer occasions of the bullet entering the target sideways.

The .270 Winchester is heavier and has a higher velocity, meaning it has a greater stopping power than its competition. That’s helpful for bringing down bigger prizes. As an added bonus, it’s more effective for self-defense in a dangerous situation.That can be effective for keeping loadout down. Oftentimes, hunters will have to carry a close-ranged firearm such as a high-caliber handgun to protect themselves in an up-close encounter.The superior stopping power of the .270 Winchester can stop those up-close encounters from ever even happening!

Because of the higher velocity and the greater stopping power, the .270 Winchester is significantly better in a short to medium distance hunting situation.The velocity will die down as distance increases so you’ll want to keep distance down, if possible. The 6.5 Creedmoor can catch up quickly as distance increases, so this perk won’t last long.That makes the .270 Winchester a more valuable round to have loaded when you’re hunting in thickets or close-quarter areas such as forestry.It also will be superior if you’re the type of hunter that prefers to close distances rather than take a shot from afar. Your hunting style and the environment will decide how much of an impact this quality has.

The ultimate decision, as it often is with comparisons of this type, is that neither can reign supreme. There are so many factors that affect hunting that one shines where the other won’t, and vice versa.

In a close-range or low-visibility environment such as forestry or swamplands, the .270 Winchester is likely to be superior. The increased stopping quality and higher velocity will help to take targets down with much more ease than the 6.5 Creedmoor.

In a close-range or low-visibility environment such as forestry or swamplands, the .270 Winchester is likely to be superior.

If you prefer to shoot from afar in a more open environment like prairies or plains, the 6.5 Creedmoor’s higher distance and accuracy are both likely to appeal to you.

The lower weight of the bullet offers several perks as well as a handful of drawbacks.

The best thing to do is to test both for yourself. Purchasing a box of rounds of each to test out can help you see the drawbacks and perks of each, in person. Experience will always be the best teacher.

Have you tried either (or both) of these options? Did you find yourself favoring the 6.5 Creedmoor or the .270 Winchester, and for what reasons? Let us know if you have a strong opinion on either of these fantastic options!