How To Pick The Magnification Scope You Need And Other Tips

Whether you need a basic 1-4x scope or something more elaborate, magnifying tools are an essential part of many firearms. In this guide, we can show you how to pick the magnification scope you need.

Magnification scopes are one of the most important parts of many firearms. After all, shooting at 10 yards with the naked eye is much easier than shooting at 400 yards or more. In this guide, you’ll learn about the different types of sights, the best ranges of magnification, and some of the best products currently on the market.

How to Pick the Magnification Scope You Need: The Five Types Of Sights

When it comes to how to pick the magnification scope you need, you should know the five types of sights. There are five primary types of sights available on the market, each with different and distinct features.

These sights are available on almost all firearms, even those that have another type of scope attached. Most people recommend keeping the iron sights on – there’s always the chance that your other optics will be damaged or drained of power, and having any sight is better than having none. That said, using these sights is harder than using an attached scope, so be sure to check out a guide (like this one) and learn how to use them.

As little more than a chunk of metal made of polymer, aluminum, or steel, iron sights have a magnification of 1x – that is, no magnification at all. For ease of use, some iron sights can be flipped up for use, rather than remaining in a fixed position. On longer weapons, there are usually two sights to help line up the shot.

Sometimes referred to as ‘reflector sights’, these consist of illuminated projections that use curved mirrors to be superimposed on a shooter’s field of view. The reticule itself is aimed at an infinitely distant location, so it stays on-target regardless of the shooter’s relative position. This almost entirely eliminates parallax and other common sighting errors, hence the popularity of this sight in WWII.

Reflex sights are still in common use, and you can find them at most locations selling scopes. These sights often have some type of magnification. It could be as small as 2x, but any magnification is better than nothing when you’re trying to hit a low-contrast target.

Often referred to as ‘red dot’ sights, though green has become more popular in recent years, laser sights send out a laser, so a small dot appears on the actual target. While the lasers themselves are incredibly accurate, they can’t account for problems like distance, wind, or ballistics.

As such, laser sights are most effective when used in close-quarters encounters – the exact situation when magnification scopes are least useful. You don’t need a 1-4x scope if you’re having a mock battle in a dense warehouse, and you don’t need a laser sight if you’re hunting deer at 100 yards.

(This shouldn’t be taken to mean that laser sights are bad, just that they aren’t appropriate for every situation.)

Holographic sights are similar to reflex sights in that they consist of an image superimposed above the target to improve aiming. However, unlike the fixed position of a reflex sight, holographic sights can be adjusted for issues like range and wind. This makes them more flexible and, ultimately, a better choice.

Holographic sights don’t always come with magnifiers, but some people have taken to adding one. That gives enormous flexibility with magnification range, though most people find a variable 1-4x scope to be entirely suitable for most long-range purposes.

These are the true magnification scopes, and they come in two varieties. Fixed magnification scopes always magnify a set amount, such as 2x or 6x the original power. These aren’t as versatile as the second type of scope (below), but they’re usually brighter, clearer, and less distorted.

Adjustable scopes (also called “variable scopes”) can modify magnification in a set range. For example, a 1-4x scope can go from no magnification to four times as accurate, easily adjusting to match your current scenario.

The maximum magnification can go quite high. Some retailers sell sights that magnify as much as 60x, but the odds of actually needing that kind of power outside of specialized competitions are nonexistent. It’s always best to get a magnification that matches the situation you expect to use a firearm in.

If you’re carrying a weapon to protect yourself, remember that most confrontations take place within 50 yards or less. At that range, a laser sight is easier to use than a scope. On the other hand, if you’re in a sniping competition, you may want the highest magnification you can get without sacrificing accuracy for a given range.

Gun Digest has a good overview here. What it really comes down to is that the best magnification is whatever gives you the clearest image of your target at the lowest setting. Remember, your movements are exaggerated the higher your magnification is – a small twitch at 1x could completely change the field of view at 20x. This is especially bad if you’re trying to hit a moving target.

To put it another way, you can have too much of a good thing. If you have no experience with scopes, go to a shooting range or a local retailer and ask if you can try a variety of scopes to find the type of magnification you’re most comfortable with. Under no circumstances should you just order a scope online and hope for the best – nothing substitutes for hands-on experience.

How to Pick the Magnification Scope You Need: Our Top 4 Picks

Now that you know a little more about the types of sights, here are some of the best options currently on the market.

This reflex sight from Sig Sauer is on the expensive side – retailing just under $400 – but it’s an outstanding product that more than gets the job done. The motion-sensing technology powers up the illumination when it senses movement then shuts things down afterwards to extend the useful battery life.

Meanwhile, the lens is coated with an anti-reflection material that works across the entire visible spectrum. The practical result of this is improved light transmission and minimized distortion, providing the best improvement in accuracy at any practical range. 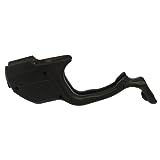 This relatively affordable laser sight usually retails for around $126, making it much easier on the budget than the previous entry. Several helpful features help this sight stand apart from the crowd.

First, the green laser used is the brightest allowed by law. This isn’t a true stealth item – and if you’re going to highlight the target, you may as well ensure you can see the point you’re aiming at. It also has tap-on/tap-off controls for easier use, as well as controls for either constant-on, momentary illumination, or strobe modes.

It’s powered by a 1/3N battery that’s included with the sight, and fully eligible for Crimson Trace’s Free Batteries For Life, a program that can save you quite a lot in battery costs if you use this sight on a regular basis. While often shown on pistols, this product is flexible enough to fit on most shotguns, pistols, and rifles that support the M1913 Picatinny rail. User installation is easy.

All-in-all, this is a solid and reliable laser sight – and if you ever need it, it’ll get the job done. 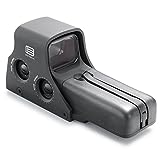 EOTech invented the holographic sight, releasing the first commercial model in early 1996 after decades of technological development by various groups. Given that pedigree, it’s no surprise they continue to manufacture the best on the market. EOTech isn’t cheap, but you’ll never go wrong with them.

This holographic sight has just 1x magnification, but it also has parallax free holography and unlimited eye relief. It works in temperatures ranging from -40 to 150 F, it’s waterproof up to 33 feet below the surface, and careful sealing ensures it’s fully fog proof. It’s even compatible with night vision, allowing you to keep hunting when it’s dark. It doesn’t emit anything on the muzzle side, preventing animals and detection systems from noticing its use.

Despite all of this, the 552 has an incredible battery life. High-quality lithium batteries can last for up to 1,000 hours of continuous use at Nominal Setting 12 (basically, ‘average’ use), while alkaline batteries can still manage as many as 600 hours. Given that, you shouldn’t need to change the batteries very often, even if you use your weapon on a near-constant basis.

This is easily one of the best telescopic sights currently on the market. Its lowest power, 5.5x, is suitable for mid-to-long range hunting. If you also plan to use your gun at closer ranges, it’s best to pair it with the Crimson Trace laser sight above.

Meanwhile, at its maximum of 22x magnification, this rifle provides accurate shots at ranges of 1000 yards or more. While we wouldn’t recommend this in forests, where you rarely have that kind of range, it’s always nice to have that kind of support if you need it. The question here isn’t whether the scope can support the gun – it’s whether your gun can keep up with this scope.